Bicycle cards, if you ask almost anyone, are one of the world’s leading playing card brands. The United States Playing Card Company (USPCC)  is the manufacturer, printing millions of card decks each year, and the trademark Bicycle name and logo are recognizable internationally as a card player favourite.

The familiar brand we all know as Bicycle was first introduced to card players in 1885. The brand is very recognizable in a few ways. First, the Joker card always features a King riding a classic bicycle. The backs of a standard deck of Bicycle cards often feature a winged man riding a bicycle and on the box, the iconic Bicycle is  written in a signature curve harking back to the 1800’s graphic style. The Bicycle trademark is printed on the Ace of Spaces.

Serious collectors and professional card players are all familiar with Bicycle decks, appreciating them for their durability, strength and unmatched feel as well as their long history. Many of the card decks you’ll see in homes all over the world are also – you guessed it – probably from the Bicycle brand.

Vintage and antique Bicycle decks are everywhere, but so are fakes and counterfeit cards.

If you would like to know more about the Bicycle decks part of your collection or what else the brand has to offer, keep on reading… Here’s the ultimate guide to Bicycle cards, including information on how to date or authenticate your deck. 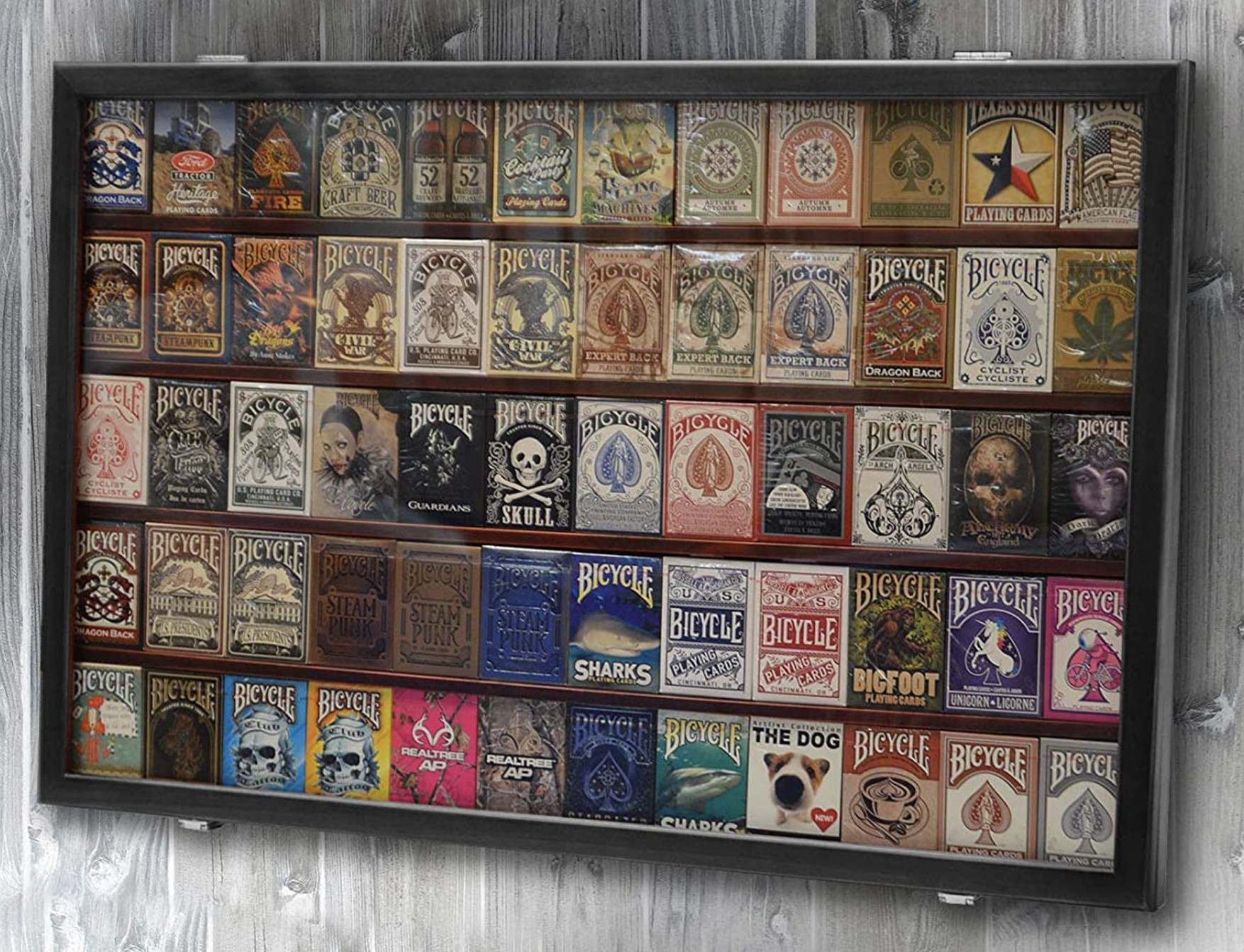 The USPCC manufactured some unique Bicycle decks during war time. For WWI they produced, in 1917, a War Series which featured Flying Ace for the Air Force, Dreadnaught for the Navy, Invincible (aka Conqueror) for the Marine Corps, and Big Gun for the Army.  Most of the inventory was destroyed when Armistice was declared in 1918 so finding one of these decks in good condition is a collector’s dream

Unique Bicycle decks were also created for WWII. The cards in these decks could peel apart under water providing a blank area where maps could be drawn, then the cards would reassemble to look like any old deck. This was to help prisoners of war for use in escapes. There’s an example of one of these decks on display at The International Spy Museum in Washington DC.

Perhaps one of the most interesting historical stories is that of the Ace of Spades. During the Viet Nam war, the USPCC printed thousands of these cards and sent them over to troops during the war. The reasoning was that the Viet Cong were suspicious of the Ace of Spades believing it to be the symbol of death. American soldiers would scatter the cards throughout the jungle and villages during their raids. In fact the Viet Cong had no suspicions about the card initially, but the story and the cards helped with soldier morale. Cards were also printed for the Gulf War in 1991 but this war was short, and the cards never saw battle.

If you’re a collector and are wanting to find antique, vintage Bicycle decks and cards, one of the best places is 52 Plus Joker, a card club where all the collectors and fans hang out. You can also try e-bay. 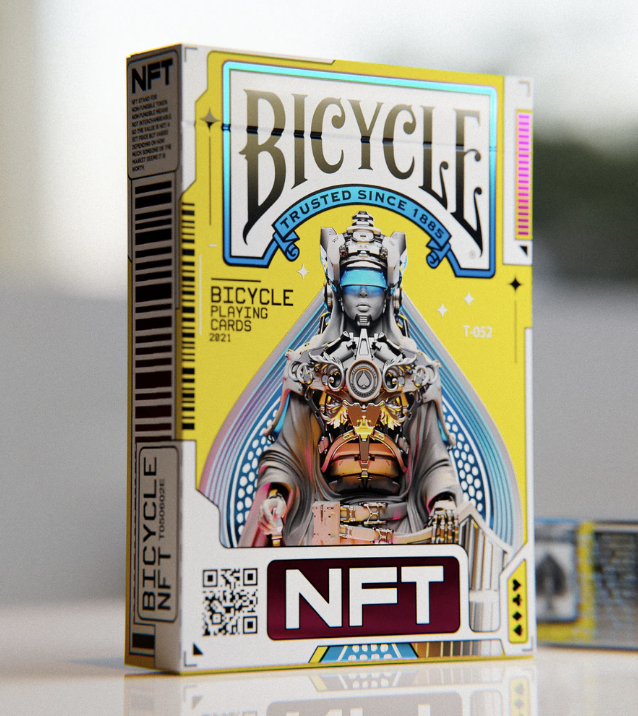 You might also be interested to learn that USPC  entered the NFT collectible arena on December 9th, 2021 with their Genesis Collection. You can find their 3D-graphic NFTs on KolectivGG – curated NFT marketplace. USPCC’s official Twitter account announced, “Join us as we bridge the gap between traditional cards and true innovation!”

Of course the company that manufactures the world’s most famous playing cards would also have materials to help a person learn card games and references for the rules of card games.

Their book Bicycle Official Rules of Card Games features 250 games, and includes a history of playing cards, advice on choosing a card game, and ‘bet-you-didn’t-know inserts’; this book is a thorough reference for card games.

The super useful How-to-Play App contains the rules of most common card games you would want to know about in an easy-to-read format. From poker to blackjack or bridge and pinocle, this is one of the best card rule apps you can find. Check it out and you might even learn the rules for a few new card games.

The USPCC dating code is what will help you to identify the majority of Bicycle decks, and tell you details about the deck you have – including its approximate manufacturing date. Dating codes only started to appear on decks post-1904, and are usually printed on the Ace of Spades and/or Joker cards.

Bicycle cards uses a letter identification code, with each letter-series linked to a manufacturing date. Letters reset again once they have reached the “end” of the numbering cycle.

United Cardists has a great guide that can tell you How to Date a Deck of Cards from their forum if you would like to know exactly when a Bicycle deck you have or have seen somewhere was issued. https://unitedcardists.com/viewtopic.php?t=47

Almost anything in the world that sells particularly well will eventually be faked or counterfeit, including brand-name sneakers to, far too often, playing and trading cards.

Always compare decks that you see (for example, in classified ads) to actual examples from the manufacturer’s website. While fakes are sometimes close to the real thing, there’s almost always something “off” about the counterfeit that you’ll never see with real Bicycle cards.

Some obvious counterfeits get the basics right and might even have the right serial numbers, but can’t produce the smooth edges, correct shades that match a real Bicycle deck.

Always ask the manufacturer directly if you aren’t sure about the authenticity of a deck you’ve seen. Rare, vintage or collector’s decks are more likely to be ones that people will counterfeit thanks to the higher associated values.

The Cardists have a great, clear YouTube video that can show you an authentic Bicycle deck compared side-by-side with a counterfeit. The differences, the way they explain it, are clear.

Have you ever wondered just how playing cards are made? The Travel Channel has a great guide that takes you through the USPCC factory for an inside look. Watch the segment here if you want to know more about the manufacturing process behind the great Bicycle deck.

The best resource for Bicycle cards would be the official Bicycle website, where you can buy tons of Bicycle decks and merchandise you won’t find anywhere else. Limited releases and rare decks are sold through the store, and you can find everything from old-timey Saloon-style poker cards to large-print Bicycle decks. You can also find Bicycle cards on Amazon.

A word about the United States Playing Card Company and Cartamundi

In December 31, 2019  a Belgian privately owned group Cartamundi announced the acquisition of The United States Playing Card Company (USPC). This marked the addition of the iconic Bicycle®, Bee®, Hoyle®, and Fournier® brands to the Cartamundi brands portfolio and contributed to Cartamundi’s strategy to strengthen its role as a key player in the global entertainment industry. You can find more information regarding this acquisition on the Cartamundi website.

Many professional magicians consider magic kits corny, but they can still remember their first one!

Can You Kill Someone With a Playing Card?

Card throwing just looks awesome. And, since most of us have a deck of cards

The Archaeology of Cards: Why we Play with Hearts It’s a rare person that can’t