If you’re a police procedural fan and love solving mysteries, check out Chronicles of Crime. Developed thanks to a Kickstarter campaign, this game combines co-operative crime scene investigation with an app, a board game and some virtual reality, for good measure.

Perfect for 2-3 crime sleuths to play together, each round of the game lasts between 60 to 90 mins.

Investigating crimes around the city of London, players use the app to scan the QR codes on the cards in the game in order to discover more clues. You’ll also have the opportunity to use a pair of VR glasses to find clues at other locations.

Players start the game by selecting a case. We meet with the Chief Police Officer at Scotland Yard to be given an outline. Working together, our goal is to catch the killer in the shortest possible time.

To do this, you use the Scan & Play technology through the mobile app to scan the QR code on each location, character and item card to activate different clues and stories that will help you with the case. 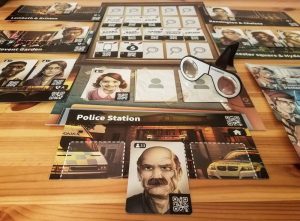 Use your VR glasses (if you have them) to discover other clues in each location. Don’t worry, you can still find the clues without the VR glasses but crime-solving duos who have the glasses will find they have an edge.

To help your team keep track, you’ll need to place the evidence and special item cards on the board to organize the clues in the case. When you’re interrogating a suspect or an informant, you can scan items as you go along to see if they match the information you’re given.

The four Forensic Contacts can help you decipher the items and potential suspects you’ve found, so make sure you return to them often-as the information they give you can update your case file. While it’s not mandatory, I’d recommend having a pen and notepad handy to write down some of the clues, suspects, evidence and locations. Each time I’ve played the game, I found it much easier to keep everything organized by writing it all down.

In addition to keeping records, my experiences showed me that team collaboration really is the key to success with this game. Because you only get 40 seconds or so to view each clue, it’s important to share your findings with your teammates and help each other fill in the blanks. Though there’s a handy tutorial that will show you how to play (and it’s easy to learn), you’re on your own when it comes to figuring out the clues.

During my time playing through two of the cases, my team and I got stuck more than once due to the ‘open world’ nature of the game and the fact that we were on our own to find the clues and suspects. The fact that the game doesn’t hold your hand adds to the challenge and increases the re-playability for each case. In addition, depending on how you scan the cards, each different scenario will lead to new stories every time there’s an app update, which prolongs the game even more-and you don’t have to pay for the physical components again.

You win the game by going back to the home location and answering some questions about your conclusions on the case. Your score will depend on how well you answered the questions and the amount of time you used to answer the case.

This is a great game if you want to test your detective skills and collaboration abilities. Note you’ll have to plug your phone in often because the app will definitely drain your battery. With the increasing difficulty in the different cases and new app updates, there’s built-in re-plays and flexibility in the game that will keep you coming back for more. Definitely worth the purchase through your local board game store or on Amazon.

Spooky and Creepy Cards Games for your Halloween Extravaganza

It's officially the start of a new year. For tabletop and board game fans, this