Bananagrams is an interesting Scrabble variation which eliminates the frustration of taking turns. In this game every player builds words all the time.

But before Bananagrams came another game called Take Two. If you love Scrabble but hate waiting, then Bananagrams and Take Two are the games for you.

My family discovered “Take Two” more than 25 years ago and over time it’s become our signature game.

To play, you just need a set of Scrabble Tiles, paper and a pen.

Spread the tiles out face down on the table. Each player chooses 12 tiles.

On the word “Go!” players scramble to turn over their tiles and create their own crosswords. Every word must somehow link with another word.

Eventually there are no tiles left in the middle. Then it becomes a race to use up all the letters in your pile and get the 10 point bonus. Some players may have just one left to place but others are working fast to reduce a big pile.

Suddenly one player places their last tile and calls “OUT!” All play stops. The winner reads out all their words and everyone else reads their best word.

Lastly, you total your tile values, subtract any unused tiles in your stash and give your score to the scorekeeper. Then all tiles are turned face down, thoroughly mixed, and play begins again.

You can play as many rounds as you like, accumulating points for each. We’ve been known to play for hours, when the scores are close.

We’ve created a few Take Two variations over the years, some better than others. Here are our most successful ideas:

How To Play Bananagrams

The rules for Bananagrams are somewhat different. The 144 letter tiles — called The Bunch —  have no values, so you don’t add them up at the end.

A Bananagrams round starts when each player takes their tiles. 2-4 players get to start with 21 tiles each but if you have a large group each player has just 11.

Play begins when one player calls “Split.” Everyone starts making their own words in crossword formation. Whenever someone uses their last tile they call “Peel.” All players immediately “peel off” another tile from the central Bunch.

At any time during the game a player may call “Dump” and immediately discard one tile. The catch is, they must pick up three more tiles in exchange.

As with Take Two, when someone plays their last tile the game stops. Everyone checks the winning hand for mistakes and if one is found the other players call “Rotten Bananas” and play continues.

However, if all is well then the winner is declared Top Banana for that round.

Bananagrams and Take Two are great ways to keep your brain sharp and active. Even Nana, at 80 years old, still has her competitive edge after all these years. It’s not just all the words and puzzle rearranging; the adding, subtracting and doubling delivers a good brain workout too.

Both games are winners when it comes to helping children learn to spell. After all, good spelling relies on familiarity and pattern recognition. Our youngsters begged to play Take Two and never knew they were spelling and reading too.

But more than anything Take Two has given us a beloved chapter in our shared family history.

We love playing board and card games of all sorts. But even now, whenever a few of us are together out come the Scrabble tiles. 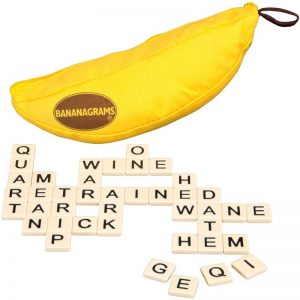 Break the Ice with Fluster

Meeting with new employees, blind date, first meeting with your significant others’ family, or meeting

Beyond Pokemon: 7 Trading Card Games You May Not Have Heard Of

Trading cards have been around for about 125 years. That’s a long time; and, as

Ditch The Screens: 5 Key Benefits To Playing Games With Your Kids

It’d be so easy to bring out the iPads and let everyone entertain themselves. But,

Hool is bridge-lite. It contains a kernel of the traditional game, but it breaks down