Ever had a meeting with new employees and struggle to break the ice? What about a blind date, first meeting with your significant others’ family or meeting new friends for the first time?

You can get rid of the awkwardness and make getting to know someone really memorable with the card game Fluster. Fluster gives you the opportunity to have great conversations with people, enabling you to share personal thoughts and tell stories without stumbling into barriers. 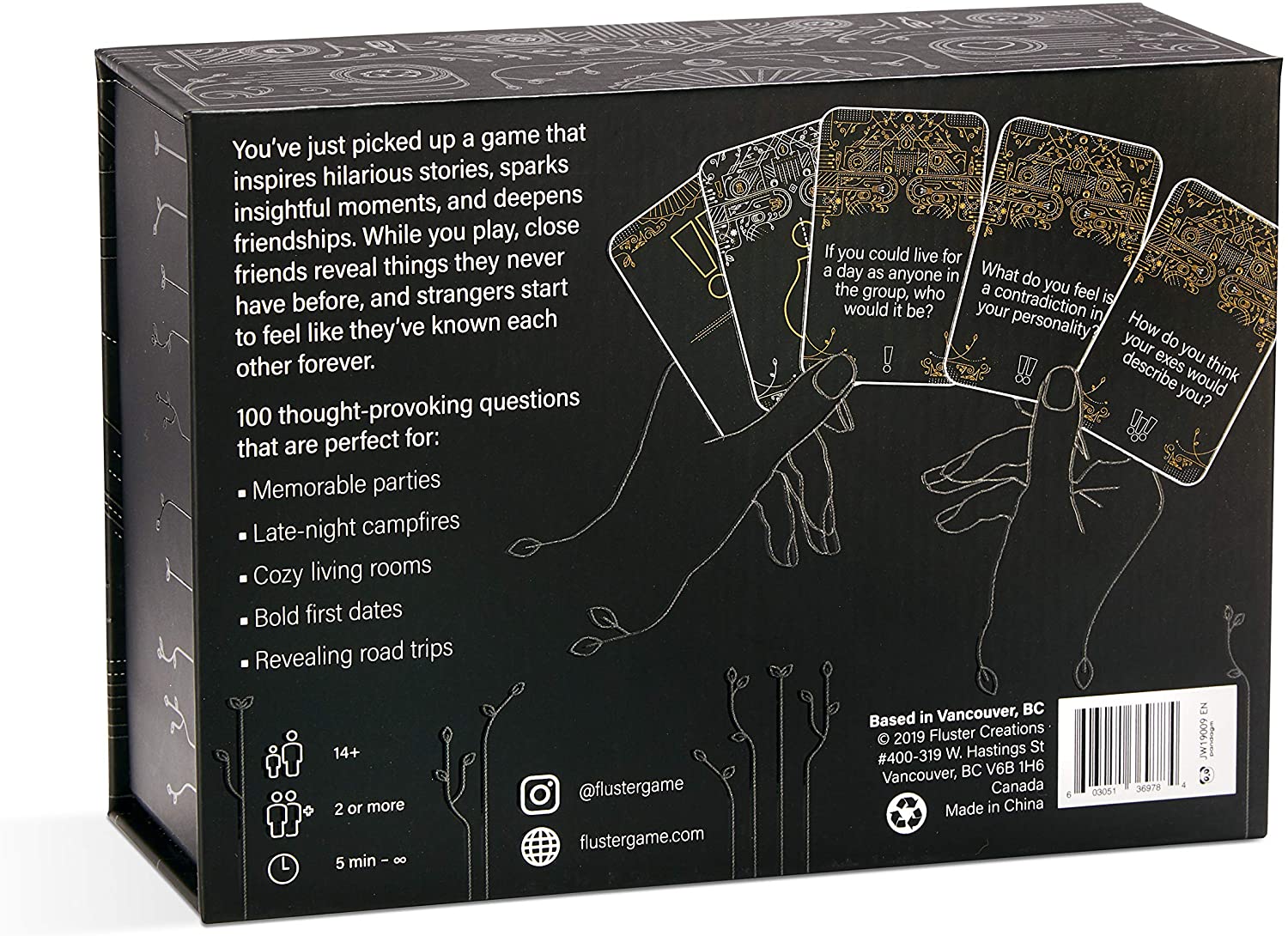 Fluster gives you a deck of approximately 100 unusual questions that can prompt thought provoking conversations and hilarious stories. The deck is split up into 3 different types of questions, ranked by the number of exclamation points. Each question, no matter the category, focuses on getting you to think about your answers and about how well you know the people around you.

Examples of questions with one exclamation point include, ‘If you had to choose one quality of the person to your right to be your own, what would it be?’ and ‘If you could have dinner with anyone in the world, who would that be?’ Questions with two exclamation points include talking points such as ‘What’s a deal breaker for you on a first date?’ and ‘How are you different from your friends?’ Questions with three exclamation points are the ones that challenge players to think about their answers. Some questions include ‘What has been one thing that you’ve tried to change about yourself and succeeded in doing so?’ and ‘If two people in the group were to be in a relationship, who would those two people be?’

Each time I play the game, there are questions that really force me to think long and hard about my past, my present and the future. I have to try and recall memories from my past like what my favorite song was, where I went for my first official date and so on. Thought provoking questions (usually of the three exclamation point variety) challenged me to think about what things I’d change if I could, what are the most important issues that I’d like to focus on for the future. What’s so intriguing about it as a game is that you still get an opportunity to learn things about people you’ve known for years-simply because certain questions never came up. For example, I learned that my husband wants to prioritize learning how to fly a drone as a new hobby and to help him on his path to changing careers. It’s amazing the things you can learn about the people you know, just from playing the game. 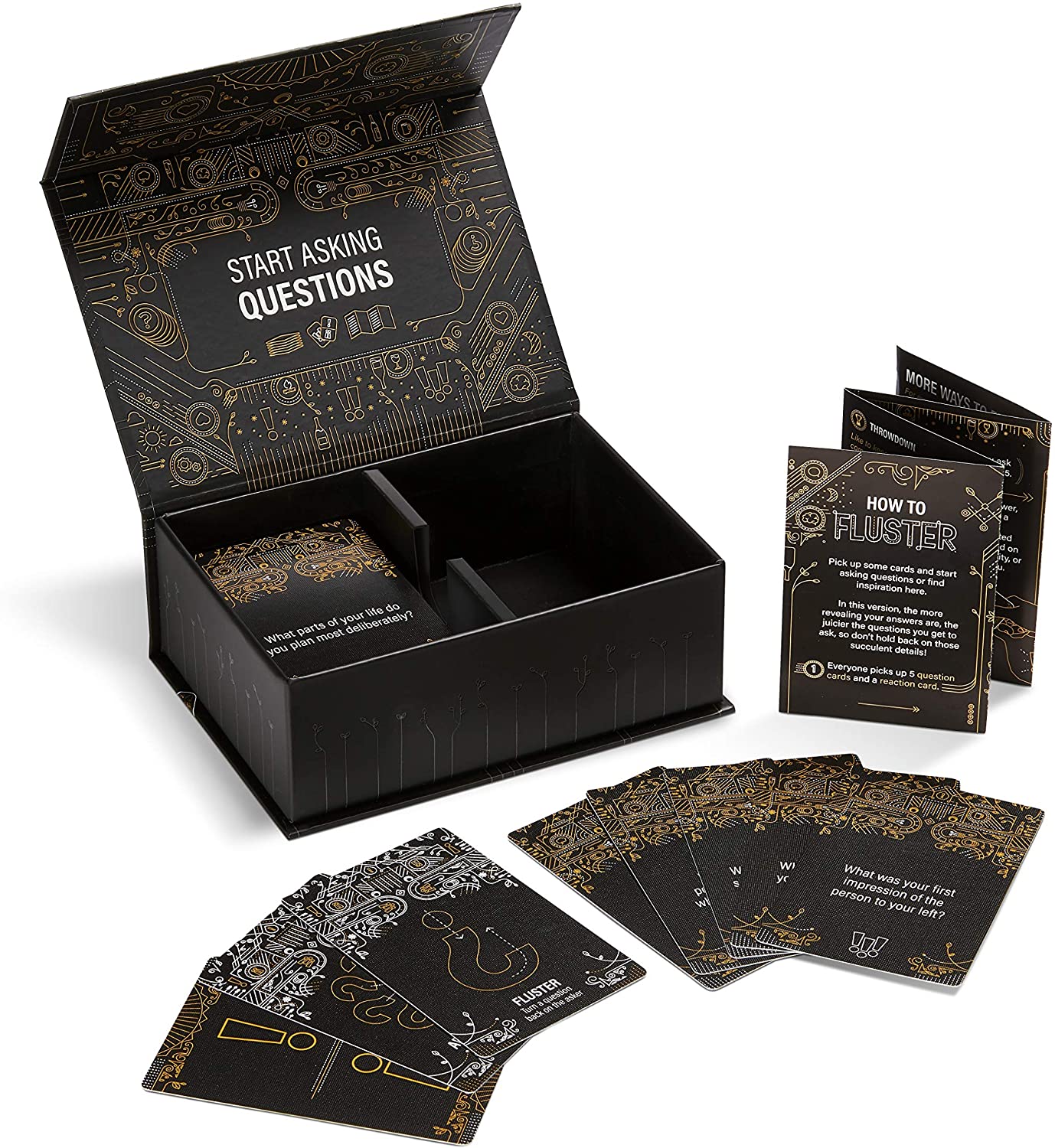 It’s one of the few games that I’ve played in recent years that doesn’t have winning as an objective. Instead, the objective is for you to get to know the people around you a little better.

There’s more than one way to play the game as well. You could use it for large scale team building as a means of introducing a lot of people to each other and allowing connections to spark.

The group can be divided by four into smaller clusters and give each cluster three questions (try a !, !! and !!! question to make things more interesting). Each person gets a sheet with everyone’s names and people will introduce themselves, check off the people they meet on their list and use one of the cards to start a conversation. There should be a facilitator that will signal to people to switch clusters and the conversations can start again.

You could also use the cards for active listening exercises between pairs of people. Each pair gets a few question cards and they take turns listening to each other’s answers. After everyone has answered, their partner introduces them and shares something that they’ve learned about the person. It’s a unique exercise in getting to know something different about someone and allowing the rest of the group to get to know them as well.

But, I’d like to add one caveat: if you’re in a more professional environment and don’t have a lot of time, take out any of the !!! questions to avoid ‘awkward’!

So – if you want an eye opener, or maybe to get to know people around you while at the same time learning something about yourself? Try Fluster! Also – it’s super pretty.

Wasabi: The Competition Game That Makes You Hungry

What to offer guests at your next card party

The Era of New Age Board Games Has Dawned