For fans of the hit adult animated series, Rick and Morty,  the Rick and Morty: Total Rickall Card Game drops you right in the middle of an episode by the same name. You get to experience the Smith family’s gradual unease and suspicion as it becomes apparent that the family has been infiltrated by parasites.

If you’ve never seen this series, this card game will definitely make you want to watch the show. To sum up the episode and the premise the game, Rick has locked the entire Smith household inside. Why? Because parasites pretending to be family and close friends have infiltrated the Smith family and have implanted positive memories to make them think they’ve always been there. What’s worse, more keep coming and the family is being overrun. 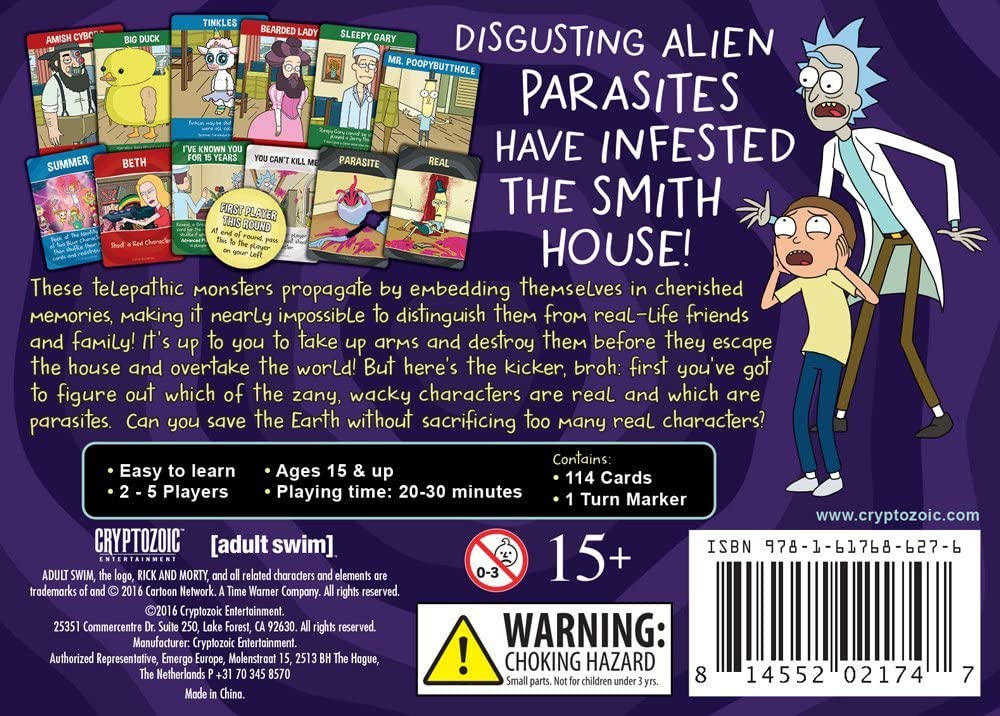 You have to put on your detective cap and figure out which of the characters are real and which ones are parasites that need to be exterminated! Up to 5 players can try to solve this mystery, in 2 teams.

You can play the game in one of two different modes: basic co-op or an advanced mode.

Whether you choose the basic co-op mode or the advanced mode, the game starts the same. You shuffle the Identity cards and put them face down on the table. You then put down the number of cards equal to the number of players X2 (so if you have 3 players, you’d put 6 cards face down). These cards will tell you which characters are real and which ones are parasites. The player with the First Player Token goes first and turns are done clockwise.

The color coded Character cards go on top of the Identity cards and they’re directly correlated with the Action cards. Each player gets 3 Action cards at the beginning of the game. These cards allow players to shoot certain characters or to peek at their identities. Your actions are secret but you can give other players hints on what you plan to do. Action cards are revealed as soon as you lay the card down on the table. After the action is completed, you pick up more action cards and resolve your turn.

So how do you solve the mystery of which character is a real or a parasite? You have to vote as a group. If there are any parasites still on the table, then the team loses. You’ll also lose automatically if you kill four real characters. 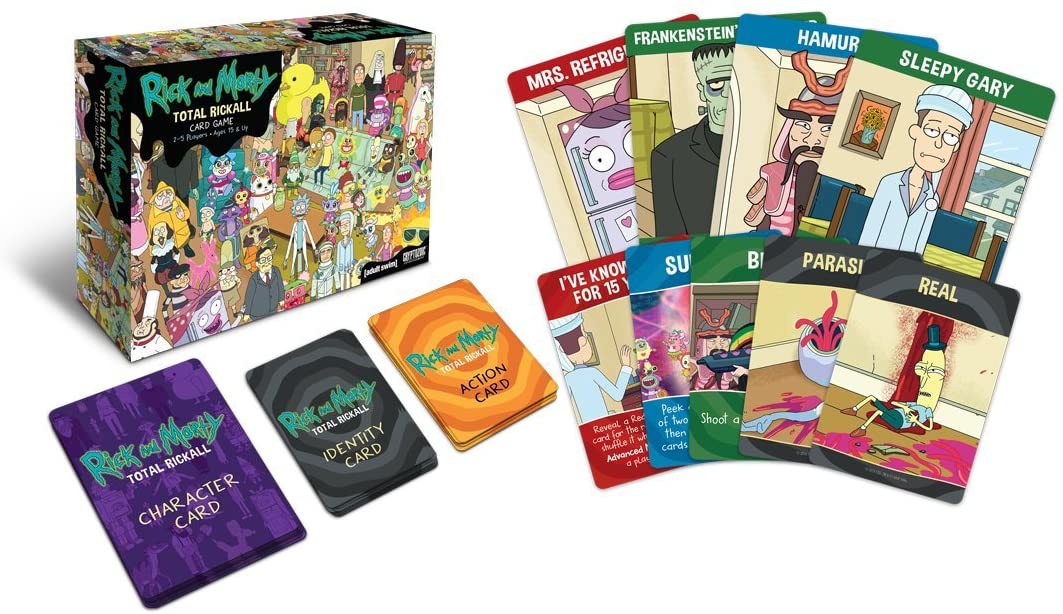 In the advanced mode, 3-5 players are dealt a hidden role as either Real or a Parasite. 4 Real and 2 Parasite cards are removed from the identity deck and reshuffled before one each is dealt to a player. The Character deck is also reshuffled and each player receives a Character card face up. No matter what, you can’t claim to be a parasite. Other players will still be able to look at your Identity card, but they can’t share any hints.

To win, the Parasite players must keep at least one Parasite alive and the Real players must root out all parasites. If, however the game ends because there aren’t any remaining characters left, the game moves to the Dinner Table.

In Dinner Table mode, you must discard all of the action cards in your current hand. Once the Dinner Table starts, your side is locked in for the rest of the game (whether dead or alive). Priority for shooting goes to the player with the First Player token and then clockwise from there. You can simply announce that you’re shooting someone. If you shoot a Real character, that Identity card is added to the fail pile. If you shoot 4 Real characters, your side loses the game. After being shot, you can still shoot other players. Once everyone is satisfied that the Parasites have been eliminated, the game ends. If any Parasite cards remain, the Parasite wins. If everyone is Real, the Real side wins. During this phase, you will not be allowed to shoot anyone in the middle of the table.

Not only is the game extremely easy to learn, fans of the TV series will certainly keep coming back to see if their deductions are correct. As a fan of the show, I definitely loved delving into the mystery to see if my guesses were correct. New gamers will also be drawn into watching the series and give the game another go to challenge their detective skills.

We took a look at the history of Kit Woolsey's famous Gammonline, one of the

Masque of the Red Death – Review

Inspired by the Edgar Allan Poe short story of the same name, Masque of the

Disturb the Peace with Anomia