Funemployed: Finding Your Dream Job Has Never Been So Hilarious

Anyone who’s ever gone job hunting, knows full well how draining applying for positions and passing out resumes can be. You edit your resume countless times, write cover letters and maybe even submit projects to elevate yourself as a candidate. So, is it possible to make job hunting fun? It is, if you’re playing Funemployed.

Using their wacky qualifications like ‘flies a panda’ or ‘speaks dragon’, players have to concoct stories on the fly and role-play as though they’re in an interview for a real job such as astronaut, teacher or lawyer. At the end of each pitch, the Employer reveals a curveball in the form of a question that the applicant has to justify and explain. Players who have the best story win the job and the round. Applicants who have the most job cards after one round (if there’s more than 6 players) or two rounds (if there are between 3-6 players) wins the game.

In my experience, it’s definitely hysterical way to have fun with a group of friends and also stretch your creative storytelling muscles. With all the different combinations of qualification cards available, the stories applicants can create to ‘apply’ for each job are nearly endless, which can and has led to some of us nearly crying in laughter. The time limit to come up with a compelling story for the interview also challenges players to think on their feet. In fact, with 89 Job cards and 359 qualification cards, the flexibility and replay ability for the game makes Funemployed one of the most economical games you can ever play with friends.

If you’re looking to be more ambitious and to extend your fun night, play Funemployed with the ‘Late to the Interview’ setup. Player applicants are dealt 4 cards that they can’t look at. Because they are ‘late’, they have to reveal the qualification cards one at a time and come up with a convincing pitch ASAP. The ‘Friends Like These’ setup challenges applicants to create pitches based on another player’s qualification cards, adding to the creative test.

Take the plunge to make job hunting fun again and stretch your creative storytelling muscles with some of the wackiest job qualifications you’ve ever heard of. It’s definitely a game worth picking up from your local board game store or on Amazon.com. 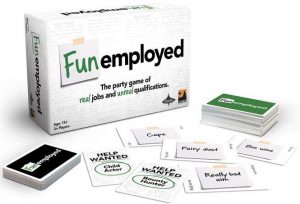 Hand-Crafted Board Games and Where to Find Them

Relive Your Childhood Fears with Are You Afraid of the Dark