Zombies, pirates, wizards, and killer robots: 4 reasons why you need to play Smash Up.

Have you ever imagined what it might be like to control a horde of zombies or a ruthless crew of pirates? How about both together? This is something that the game Smash Up can offer, the chance to combine two factions of monsters, whether that be alien invaders and ninjas or wizards and killer robots.

Smash Up is what is called a ‘shufflebuilding’ card game. At the outset of the game, you chose two factions of monsters and shuffle the decks together to create your team deck of 40 cards. Each deck has a different strategic value and figuring out which synergize best with the others is part of the fun of the game. While wizards and zombies might look cool on paper, the combination of the two may not be as powerful as say, zombies and dinosaurs or wizard and pirates.

The goal of the game is to accrue enough victory points to claim the title of the supervillain. A random selection of Base cards are dealt to the table, and each player takes turns adding either a minion to a base, playing an action card, or both in order to give their faction the best chance at winning a particular base’ss victory points. Similar to various TCGs (Magic, Pokemon) minion cards and action cards have abilities and special abilities. Each minion has a numerical value that adds to a base’s ‘breakpoint’. Once a base reaches its breakpoint it awards a number of victory points to the players who have contributed to the bases breakpoint. Each base is not created equal however, some give the most victory points to the faction who have contributed the most to the breakpoint and other give more to the runners up while granting the point leader a special action specific to the base.

The fun of this game comes from the mixing of different factions of baddies and with eight factions in the base set there are 64 combinations to try. There are many Smash Up expansions which are a necessity for the longevity of the title, with every expansion set (of four more factions) increasing the options exponentially. As well if you plan on playing with more than four friends you’ll need expansion decks since the main game comes with only eight factions (2 per player).

Each faction has a distinct set of abilities and this makes each game a unique experience. For example, Zombies come back from the discard pile, Ninjas specialize in destroying other minions, and Ghosts gain bonuses from having only a few cards in their hand. There’s a good thread on BoardGameGeek that discusses people’s favourite faction combos. Whether you are the type that likes to experiment with different play styles or someone who likes to stick to a set of favorite strategies, this game fits with all play styles.

The expansions themselves are nearly as expensive as the base set which makes this game a little bit more of an investment than most stand-alone titles. Luckily, the base game is relatively cheap. If someone were to buy the base game, I would also suggest purchasing at least one of the expansions since they greatly enhance the playability of the original. The only disclaimer that I would put here in regard to the expansions is not to buy the Munchkin expansion first since they are a bit different than the original sets because they add a few new kinks to the base rules.

The materials provided are of high quality. The cards are durable and the art for each faction is creative and style specific. The art on the card itself varies between cartoony and realistic but doesn’t overly lend to either since it is hard not to be cartoony with a carebear like faction or overtly realistic with the granny faction. The base set comes with a strong plastic deck divider that has enough space for four or five expansions before you need to consider upgrading to a bigger box.

While I really enjoy the gameplay and premise itself, the fact that the longevity of the game depends on the expansions makes it a tough sell to those who aren’t looking to spend on more than just the base set. I have played this game quite a few times with new players and it easy to pick up although choosing the right factions might be frustrating when factions don’t work well together. Most seek to play a second round, following the first, after seeing how some factions synergize. With the quality of the materials, the simplicity of the rules, and the shifting strategy of each new game, I think this is one that deserves a place on your board game shelf. 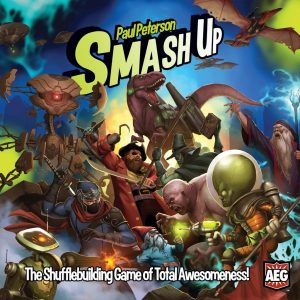 Risk Legacy: For Seasoned Risk Players Looking For Something New

"Risk: Legacy was one of the best designed board games we have ever had the

Solitaire is a peculiar cultural institution. It’s a favourite game of kids at summer camp,

What’s Up with Ms Monopoly?