Even though the game of bridge has origins tracing back to more ancient trick-taking games, we could say that it’s still constantly evolving. Innovators are finding new ways to teach the game, ranging from Bumblepuppy Bridge to HOOL.

Hool is bridge-lite. It contains a kernel of the traditional game, but it breaks down the bidding into two phases: information sharing followed by selecting a contract. In HOOL, players are allowed to give two clues about their hands – high-card points, pattern or length in one suit – after which the contract is selected. Play follows just like in the traditional version. (Interview for an article in the NABC Daily Bulletin Nov 30 2019 with HOOL creator Amaresh Deshpande)

If you would like to play a quicker match or you’re still learning the ropes, or if you have friends or family that you think would enjoy the game, many are recommending playing HOOL. HOOL hopes to simplify the most basic aspects of bridge into a game that takes minutes instead of hours to learn.

Have you heard of HOOL yet? Here’s what you should know about this unique form of bridge and why it’s different. 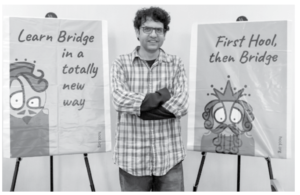 Amaresh Deshpande, a math teacher, wanted to teach bridge in his class but noticed that kids, with their shorter attention spans, would quickly lose interest in learning bridge bidding. So Deshpande created a game which would help kids teach themselves the concepts of bridge, and he called it HOOL. When designing the game, Deshpande followed principles of “Self-organized Learning” which gives learners the opportunity to discover and explore and share amongst themselves, rather than be taught.

HOOL can be taught as a card game, but it is also a board game and an app. Deshpande writes this on Bridge Winners:

For absolute newcomers, HOOL the board game takes about 15 minutes of instruction time to start playing. Here is a video shot by the WBF in Orlando 2018.

But HOOL the mobile app takes only 5 minutes to get into, because the design and technology streamlines the learning process. The beta-test version of online HOOL can be played at hool.org. (You will have to find 3 other players yourself). Future enhancements include a tutorial, robots, animation, sound, multi-language support, duplicate tournaments, etc.

Deshpande is now looking for someone who can take over the technical aspects: rewriting the code to be robust and scalable, and drive the future vision. The person coming on board will join HOOL as the Co-Founder. If you have any comments or questions or are interested in supporting Amaresh Deshpande, his email is: amaresh.deshpande@gmail.com.

Deshpande is also the developer behind Kida Puzzles, an app that introduces cards with simple logic puzzles.

Download Kida Puzzles for Android or the App Store.

The first HOOL Tournament was played at a college in Surabaya, Indonesia. In January 2019, participating college students had their part in making bridge history.

HOOL makes no alterations to trick-playing, but relies on smaller changes to take the complex edge from bidding. As a first introduction to tricks, HOOL has the advantage of being an easy form to take up. There are few rules, but lots of room for players to make agreements between themselves to enhance the game.

At the end of this article, you will find the Rules of HOOL in four steps (thank you  Michael Xu)

View the rules of HOOL at the World Bridge Federation’s official website.
http://youth.worldbridge.org/hool-rules/

And you will enjoy this introductory video: 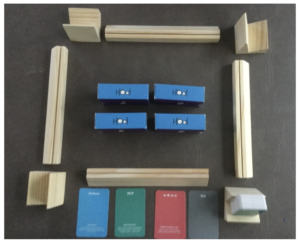 The Rules of Hool

Deal each player 13 cards from a standard 52-card deck. Then clockwise starting with the dealer, each player shares one piece of information about their hand with the rest of the table.

There are in total 6 types of information that can be shared:

This continues for two rounds so that at the end of this step, each player has shared two different pieces of information about their hand. Passing is not allowed. Psyching is not permitted.

All players secretly choose a contract for their side to make and reveal simultaneously. Pass is a legal choice. The highest bidder becomes the Temporary Declarer #1 (TD1). If the highest bid is tied between two or more players, then the person sitting closest to the dealer (starting from the dealer, and then clockwise) wins the tiebreak.

Next, both opponents of TD1, simultaneously decide and reveal whether to pass, double, or bid higher.

If at least one opponent doubles with neither opponent bidding – then TD1 has a chance to redouble or pass.

Else, one opponent has bid and the highest bidder becomes TD2 (ties broken by proximity to dealer). If either opponent becomes TD2, then TD1 and partner get the final chance, at the same time, to either pass, double or bid higher. Accordinglyeither TD1 or TD2 will become PD.

Exactly like bridge: opening lead is made by the player to the left of the PD; dummy is put down on the table by PD’s partner; everyone must follow suit if they can; highest trump played to a trick wins the trick; if no trumps are played, highest card of the suit led wins the trick; winner leads to next trick; etc.

My Obsession With Winning Spider Solitaire

I've played Klondike my entire life, with all variations of play. But it never grabbed

Love playing cards? Then you should love some of these trading card game picks. Unlike

if you’re a card player, you might already have more of an aptitude for computer

So What’s the AI-Powered Board Game St. Noire All About?