Which famous females spring to mind when you think about card games? Maybe its Barbara Enright or Vanessa Selbst? You’d be right, both are prominent and successful women in poker, but what about the females further back in time? Back when it was hardly acceptable for a woman to play card games, let alone be involved in running a casino.

In this article, we’ll be introducing you to two of those formidable historic females. 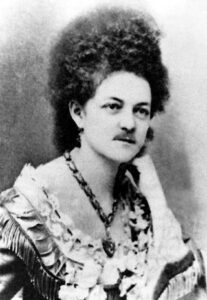 It’s believed that Eleanor was the first female pro blackjack player in the USA. Eleanor was born in 1829 to French Creole parents, in New Orleans. No one knows how she ended up in the gambling world of San Francisco, but she arrived there when she was just 21 years old.

Eleanor quickly realised that there was money to be made in this glamourous world, and capitalised on her French charms and good looks.

She scored her first dealer job in the Bella Union casino based on her amazing ‘lucky 21’ skills. Suspected of foul play, Eleanor was eventually fired from the casino. She decided to withdraw all her hard-earned cash and make for Nevada in search of better fortunes.

Here she opened her first casino ‘Vingt-et-Un’ which was a huge success with local miners, who were entranced by Eleanor’s beauty and card-playing skills.

Along with fellow gambler David Tobin, Eleanor opened a second casino named ‘Dumont’s Place’ in 1859. Offering many other card games, the place was another quick success, but just as the gold in the hills dwindled, so did business eventually.

Eleanor cut her losses, withdrew her money once more, and left for Carson City. Where she purchased a ranch and fell in love with Jack McKnight. A conman with only the worst intentions when it came to Eleanor, who soon left the city.

Eleanor’s appearance was quite tired by the time she reached Montana, though her adventures on the 21 tables continued. And she earned the nickname ‘Madame Moustache’ due to the thick line of hair she grew on her top lip but refused to shave.

In 1878 Eleanor made for Bodie in California – another booming town, where she gained notoriety in the Magnolia Saloon. Her once glamourous status and health had faded, and Eleanor soon died in the town.

Miss Dumont was undoubtedly a rarity of her time when it was frowned upon for women to gamble, travel alone, and live an independent life. 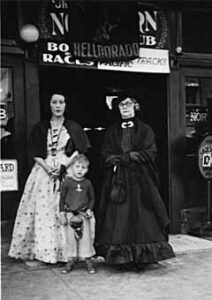 Mayme was born in 1875 in Pennsylvania into a large family, when after the death of her mother she took on the responsibility of caregiver to her siblings. At age 16 Mayme married Oscar Stocker and went on to have 3 sons. Oscar was a railroad worker and soon got a job in the very new city of Las Vegas where things were far from what they are today.

Oscar moved his family across the country and Mayme soon began to settle into local life, where she got increasingly bored with the lack of entertainment on offer. Mayme took matters into her own hands and opened a shop called the ‘Northern Club’ in 1920, where customers could enjoy a soda and a game of cards away from the desert heat.

It was legal in Vegas at that time to play 5-card games, though by 1931 all forms of gambling were legal in the city and Mayme applied for a license for the Northern Club. She received the first one that the state of Nevada ever issued.

At a time when it wasn’t socially acceptable for women to be linked to the business of gambling, this was a landmark point in history.

Mayme lived her life out in Las Vegas as a highly respected member of the community. She joined the Republican Party as well as being an active member of the Daughters of the American Revolution. Mayme died in 1972 leaving behind a card-playing legacy and being one of the founders of the Vegas casino scene.

Card playing and technology have moved on considerably since the times of Eleanor and Mayme. But it’s doubtless that we have these two ladies to thank for the rise of females involved in card games, and who nowadays are more welcomed into casinos everywhere.

Thanks to the internet bursting into our worlds, soon card games spread to casinos. It’s now possible to play at thousands of online casinos across the globe and enjoy hundreds of different games.

It’s possible to take a seat at many card games, and just like Eleanor’s ‘Vingt-et-Un’ you can even play blackjack against a real-life dealer in the live casino.

Photo by Michał Parzuchowski on Unsplash

Advantages of Online Betting Online betting is a fast-growing market. This is a result of

Shopping For Vintage NFL Playing Card Sets As the holiday season approaches, the stress and