by Kane Mus for The Game Shop, Gifts for Card Players.

While I can’t speak for everyone, my elementary school years held a special nostalgia for the computer game Oregon Trail. Each class was allotted an hour of computer development time to play one of a few educational games so that the teachers could grade papers, grab a cup of coffee or whatever else elementary teachers did back then. So, when I saw that there was now a board game version, I knew I had to try it out. I am happy to report that, much like the 8-bit version, any game is likely to end in ruin and despair.

The gameplay is a cooperative resource management game with the goal of getting at least one person to the end of the trail. Seems like a simple goal until you find yourself debating on whether or not to save your medicine for yourself or give it to the person next to you before they die.

You and your wagon party share supplies and literally forge the trail to reach the Willamette Valley together. At the onset of the game, each player starts with five trail cards and a set of supply cards distributed at random. On a turn, each member either plays a resource card or lays down a trail card that matches the previous trail card. Some of the trail cards require you to draw a calamity card which must be resolved as soon as it’s drawn. The consequences range from immediate death to slight inconvenience. Those of you who have played the 8-bit version, the calamities will be nostalgia as you suffer typhoid and broken wagon wheels on your way to Oregon.

As supplies begin to dwindle in your wagon, each fort and town will come as a welcome respite from the chaos that traversing the tail brings. Each new trail card can shift the momentum of the game dramatically as each wagon member who thrived in earlier rounds can die suddenly with no notice. Luckily, you get to loot the body of each fallen member of your wagon in the hopes that their gear might help you prolong the inevitable. As those of you who have played the computer version can recall, for each death you get to write an epitaph for the deceased and, this game is no different. After any member of your party dies, they get to write a short epitaph which the next player has to read aloud before beginning their turn. There are, however, no rules that dictate that the dead can’t continue to help the wagon party in spirit as they journey towards their final destination.

This game appeals to those who have played the 8-bit version of the Oregon Trail with the cards being in the same graphical style of the original game and lending credibility to the overall gameplay. This game is easier with more people playing it. You have a much better chance of reaching the end of the trail if you have more people to sacrifice along the way. Even experienced players of this title know that situations can change dramatically, without any warning, altering the outcome of the game.

The quality of the cards is a little weak, the card stock is a little thin. A strange choice because the cards are the only physical pieces of the game since there are no player pieces. The game comes with a dry erase board for writing the names of the members of your party as well as the back side which is used for writing their epitaphs. The marker provided dries out quickly if you aren’t careful and the boards can easily become permanently marked if the previous game is not erased quick enough.

To anyone who wants to play this game, I offer this one anecdote. I once played with a group of friends who had never played before. After everyone had drawn their cards and the rules were clear, the first person took their turn and played a trail card which forced her to draw a calamity card; it read, “you have been bitten by a rattlesnake, you have DIED of a snake bite”.  Just like that our odds of winning the game decreased dramatically. She watched as we looted the resources from her venom riddled body and then, one by one, our wagon party fizzled out nearly halfway to Oregon.

I don’t know if fun is the right word to describe this game, but to those of us who have played this game in the past, it is an enjoyably frustrating reimagining of the Oregon Trail computer game. That being said, immediately following our loss we set up again determined to do better this time. When you finally do win, it is a terrific feeling, even if you were just a body buried along the way. 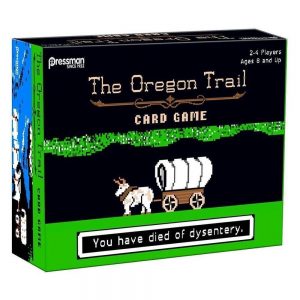 For your next holiday party, or just any excuse for a party on a random

Into the Abyss: Exploring Some Darker Card Decks, Board Games & TCGs

It’s always fun to explore the darker side of things. That’s why we have horror

If you want to see what type of person someone is deep down, just subject