When I was a kid, 13 Dead End Drive was one of my favorite board games. I loved being able to do battle against my friends and figuring out how to take their players out of the game. It’s a game of strategy and patience but you also have to be careful how you reveal the cards you have. Otherwise, you’re allowing yourself to fall into a trap.

13 Dead End Drive had this basic premise: a woman named Aunt Agatha has died and all her heirs have gathered at her mansion for the reading of the will. The objective of the game is to eliminate other heirs through the mansion’s booby traps, avoid the investigating detective and get the heir(s) you hold your hand to freedom through the front door (while their portrait is over the fireplace). 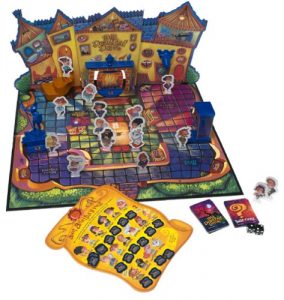 I loved that game, so as you can imagine, I was thrilled when the official sequel, 1313 Dead End Drive was released. In this one, there are sixteen heirs instead of twelve. So depending on how many players you have (whether 2, 3 or 4), you could have anywhere from 4 to 8 heir cards in your hand. Each ‘heir card’ corresponds with a pawn that’s placed on the board. Each game may only take 30 minutes, but it’s still a game where you have to be careful how you bluff with each move and how you want to strategically eliminate other players.

During each turn, each player rolls two dice and they can move two pawns based on the numbers that come up on the dice. During the turn, players are allowed to move any heir pawns on the board, regardless if they have that card or not. They can also be moved onto a Trap space. In order to spring the trap, you have to pick up one of the 32 playing cards in the stack and have a corresponding trap card to play right away – one of the many things that make 1313 Dead End Drive stand out from 13 Dead End Drive.

The traps are different, featuring a staircase, a fireplace, a boar’s head, a suit of armor and a safe. The heirs would then be dispatched by falling down the stairs, being flipped inside the fireplace, having the boar’s head drop on them and so on.

During the game, you also have to pay attention to Aunt Agatha’s will. It changes based on the deaths of each character. Why? Because every heir starts off the game with a certain number of moneybags. When one of them is ‘knocked off’, it causes a chain-like effect, where the deceased heir’s money passes onto the heir next to them.

So how do you win? You win by moving your heirs out of the mansion and by having the most moneybags out of any of the players.

I love being able to have the opportunity to try and out bluff fellow players by strategically moving other heirs, without revealing my own heir cards too early. Each time we play, it’s always been a race to the finish to see who can move out of the house the quickest with the most moneybags. It’s also a challenge to keep other players from maneuvering my heir pawns into traps. Since each game only lasts around 30 minutes, it’s all about quickly figuring out how to call someone else’s bluff while maintaining your own.

I also love the game for its re-playability. Each time I play, it’s a different experience, depending on how many people I’m playing with and which heirs I have in my hand. If you’re looking for a fun, deduction-style murder mystery game that will give you the challenge of learning how to bluff convincingly, this is definitely the vintage game you should be picking up.

Back to Basics with Battle Chess

Battle Chess is a classic. Here's a bit about it's history and influence on gaming.

Cassino is a basic card-fishing game with several variations and mostly the same rules. The

Splendor: a Splendid Way to Spend an Evening

Since buying this game last year, the phrase “I would play splendoooooor” is heard almost