Agatha Christie and Murder During Bridge

I started reading Agatha Christie when I was fifteen.  This was during the era when the BBC Poirot series was the hottest thing on PBS in the US.  I watched it with the devotion of a religious zealot.  (And thanks to Netflix, I’ve been able to continue my devotions.)  I stopped reading her novels when I was able to figure out who the murderer was.  For a school project, I devised a formula for discovering the murderer in an Agatha Christie novel and devised my own murder for the class to solve.

Christie novels created a lovely portrait of England for me, a whistful, nostalgic country where people dressed in lovely clothes from the 1930s, spoke in proper, slightly formal English with accents as sophisticated as champagne, and viciously murdered one another on cold, murky days in country estates and then had high tea with luscious china sets and fresh baked scones.  They did it with clever savagery, and only the Belgum born detective, Hercule Poirot, could unravel the complicated crime.  Apparently, in post-Sherlock Holmes England, the English are brilliant murderers and rubbish detectives.

This brings me to Cards on the Table: it isn’t the best Agatha Christie novel, but it is probably one of her smartest.  Deficient in character and description, it is rich in dialogue and murder.  This short novel is a puzzle as good as any crossword or soduku and nearly a non-stop read.

The murder occurs during a bridge game.  It is a locked room murder and only the four players could have done it, the victim being an eccentric, mysterious, foreign born millionaire that none of his guests liked, yet enjoyed his sublime parties.  The women found him creepy and the men thought he deserved to be “kicked”.  On the surface, these are the only motivations for getting stabbed through the heart by one of the players whilst being dummy.

The most fun of this novel will be for bridge players.  Christie’s characters often play bridge in her novels before murders, but in this case she goes into extreme detail as to the hands and pace of the games.  Poirot analyzes the hands, seeking clues as to which of the players could be the murderer.  And, really, knowledge of bridge would provide insight for a reader into the characters.

I would also highly recommend the BBC Poirot adaptation of the novel.  It is lovely and faithful, often using Christie’s dialogue from the book.  And David Suchet’s Poirot is, most definitely, as perfect of a dramatic performance as possible.  The movie brings to life the melodramatic nostalgia that attracted many Americans to Christie, foregoing any attempts at creating gritty realism that is common in murder dramas of the present.  And what the novel lacks in characterization, the adaptation fills in the gaps, expanding on subtext and adding rather spicy motivations for the characters. 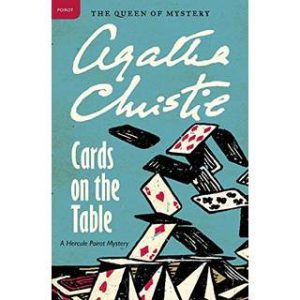 Young or old, we’re all glued to our phones these days. Most of us lament

Gothic art draws its inspiration from life's darker themes - the things that are macabre,

We’ve all picked up a deck of playing cards in our lifetime, most likely playing