Risk Legacy: For Seasoned Risk Players Looking For Something New

I have always loved Risk; the classic 6-hour-long board game of strategic conquest. I enjoyed a brief golden age of full-day Risk parties with a handful of friends before everyone got bored of playing the same game for hours and hours on end. Which was fair … but unfortunate. I went several years without ever finding a new group of people to rope into spending a full weekend slowly succumbing to my conquest.

That is, until last year, when a new friend of mine picked up a copy of Risk: Legacy (Wizards of the Coast) at the local game shop and insisted that we pick a night of the week to get together and play it … every week for the next few months. And so we did.

The point of Risk: Legacy is to play it fifteen times with the same people, because each game allows players to change the board in new and different ways.

For example, the winner of each game gets to choose between naming a continent and founding a major city. If you occupy every territory in a continent that you have named, you are awarded an additional troop bonus on top of the regular continent bonus each turn. If you found a Major city, the territory you place it in becomes legal starting territory for you (the founder) alone, and the territory’s population value counts as 3, rather than 1 as it is for unmarked territories. Losers also get to alter the board at the end of each game. Each losing player may either found a Minor City, which is worth +1 population value to the chosen territory, or upgrade a card by adding +1 resource value to it.

The first five or six games are interesting enough with just these new mechanics. The additional HQ, mission-card, and resource-card components hurry the game along a bit (our first game lasted just over an hour), and everyone has a chance to build up and settle into their continents and territories of choice. By the seventh game, things start to get even more interesting, as new rules are unlocked and new ‘factions’ are introduced. Factions are essentially different armies, and at the beginning of each game, players get to chose which faction to represent. Each faction comes with its own unique set of perks to chose from, and new perks are unlocked gradually over the course of fifteen games.

New factions, perks, mark stickers, and rules are sealed away in various cardboard compartments in the game box, and can only be unlocked when certain landmark achievements are made on the board.

Because these compartments are completely sealed, you don’t know what is coming up until they come into play, allowing plot-twists and surprise endings that completely flip the dynamic of the game and can launch underdogs into unexpected victory. I won’t get into detail about what these surprise components are, but suffice to say we had a great time discovering them and constantly adapting our play-styles as new elements were introduced. The twists, surprises, and added features work together to constantly adjust the pacing of Risk legacy, preventing individual games from dragging on and on after everyone has mentally checked out.

Once all fifteen games have been played, the player who has won the most games is proclaimed ultimate victor.

We played fourteen games, and decided not to play the last game, as we were all content with leaving it at a three-way tie. After spending so many hours together playing different iterations of the same game, it felt wrong to let any one person walk away with all the glory. Though we never agreed on who would have won the final round, we certainly agreed that Risk: Legacy was one of the best designed board games we have ever had the pleasure of playing together.

RISK LEGACY – Play it, Change it, Make it Yours. 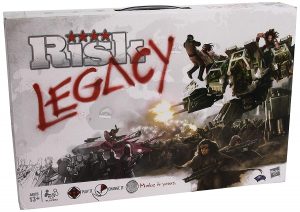 Released in 2015, this board game has quickly become a titan. With minimal pieces and rules,