Disturb the Peace with Anomia

Never in my life have I had a game bring me to tears and cause me actual physical pain from laughter before Anomia. I got the game as a Christmas gift from my sister and to be honest I was uncertain at first, but within ten minutes of opening the game I was having the time of my life.

It’s the kind of game where you have to be alert the whole time, keeping an eye on everyone else, while at the same time not taking it too seriously. Just so you know in advance, you and everyone at the table will be making a complete fool of yourselves.

“Anomia” is a term meaning the inability to find or remember the names of things or specific words. In the game, you are forced into a high stress, high speed word game where it can be your turn and anyone can be your opponent at any time. When tensions get high, simple words can end up being forgotten and some ridiculous things are blurted out.

You have to flip cards over quickly and everyone has to be ready to react. All the cards have a symbol and a category on them, and each turn you flip over a card and put it in a pile in front of you as quickly as you can. If someone else flips a card with the same symbol as you have in front of you, you have to call out something that fits into the category listed on their card before the opponent calls out something for yours. While sometimes it goes fine, very frequently someone will shout out something in their own category, or the name of the category, or something unrelated entirely, or just complete gibberish. No matter what happens during a round of Anomia, it’s usually hilarious.

Since it is a game where you have to flip cards, a lot of players have certain habits that have to be worked around, such as accidentally covering their cards or flipping too slowly. Another issue being that some of the categories are too specific, or not well known enough – things like “Male Tennis Player” or “Blues Musician”. I think the game would benefit greatly from the inclusion of some blank cards to add your own categories to.

Teaching the game is also very easy compared to most games. Once you run through a practice round everyone’s on board and understands the game. The one thing that requires a little bit more explanation are the wild cards that change which patterns match for a short time. The wild cards are easy to teach but they give the game another layer for tension to build up in, which ultimately makes it even more fun as people start to lose focus on their cards even more. The scariest thing about the game is that it doesn’t matter whose turn it is, if any two symbols match for any reason, it’s the first person to shout it out that wins the round. And lastly a word of caution for those who tend to naturally make screaming and grunting noises while trying to think of a word, sometimes your opponent doesn’t notice until you start making sounds.

Anomia is not a competitive game, it’s a casual, fun and very loud family game – perfect for any group that doesn’t mind disturbing the peace for a while (it gets loud!). My experience with the game has been the most I’ve laughed in years, and there’s nothing better if you’re looking to have a fun game night. 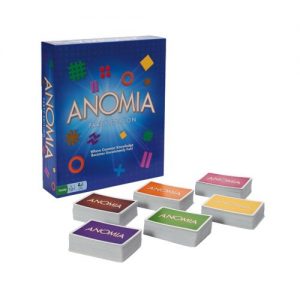 The Best Tabletop & Board Games Being Promoted On Kickstarter Right Now

What’s Up with Ms Monopoly?

Duelling on Discord: The Ultimate Card & Board Game Players’ Guide

Here's the ultimate card & board game players' guide to Discord, how to use it,