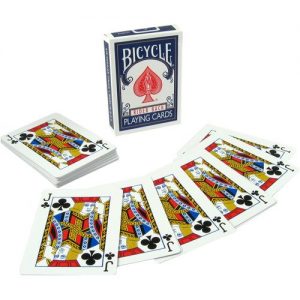 Trick Card Decks & Where to Find Them

Over the years, I’ve developed a deep-rooted fine love for card and coin tricks; those are two things I’m almost never without – when killing time waiting for a taxi to pass, while waiting for an important e-mail to come in or while in conversation on the phone for a radio interview, my hands are usually busy with a coin palm or a card flip.

Here are some of the most popular trick decks and where you can find them; of course, please use them only for card tricks and not for rigging a card game…

According to website Conjuring Credits, credit for invention of the Svengali trick deck goes to either Burling Hull or W.D. Leroy. Svengali Decks allow for a couple of popular card tricks with very little work on the part of the magician: A card is taken from the deck and placed back in, the deck is shuffled and the card at the top – magically! – will be the chosen card.

Nope, this isn’t the one with the scantily clad guys and gals on them; instead, a stripper deck allows the magician to feel the position of a specific card within this deck when they are doing a trick. This is the secret to, among others, the Rising Card-trick.

The Invisible Deck is one of the most popular card tricks out there, and often one of the first ones people encounter when walking into a magic shop asking for trick decks; you can buy a pretty solid set of these from Magic Encarta that comes with a sleeve that won’t give away your entire trick – and a pretty gorgeous back-design.

Double-faced playing cards are just that – the same image on the front or back, and if you’re clever with these you can have a lot of fun with your crowd. As usual, we’d recommend Bicycle –branded cards as the go-to for any new and experienced magicians.

Okay, okay, these count as more of a prank deck than they do a trick deck, but we found them too weird not to include. The description for these cards claims that they will deliver “a harmless shock” to anyone who happens to pick up one of these cards. That’s one way to get some cards flying around a table – not that we’re giving anyone any ideas. (No, really, don’t do that to anyone.)

The Card That Never Ends

Our research brought us another one from the weirder parts of the internet; how would you like to send someone a greeting card that just doesn’t stop? We can’t think what on earth anyone would use this for except maybe their worst enemies. These aren’t playing cards, but you can include a custom message – maybe the chorus from Ace of Spades? If not, opt for a baby that won’t stop crying or what they call “the most offensive card ever”.

Well, that got weird quickly. Have fun!

Can You Kill Someone With a Playing Card?

Card throwing just looks awesome. And, since most of us have a deck of cards

As a horror author I’ve always loved a good, bone-chilling ghost story; that got me