Tsuro – The Game of the Path

Tsuro blends its beautiful artwork and simplicity into the perfect addition to any game night.

For anyone looking to start an evening with an unfamiliar group or anyone who is inexperienced in board games, Tsuro is a great starting point. Being one of the easiest board games to learn and to teach, the game is quite simple but still a lot of fun.

One of the best things about the game is how it can be played with such a varying amount of people, meaning it’s good for casual game nights or smaller scale parties. Simple enough to explain to a young child, disinterested participant, or drunk, it allows for everyone involved to feel included. The game also comes with a wonderfully illustrated board that has drawn the admiration of every player I’ve met so far.

The objective of Tsuro is very simple: Stay on the board. On every turn, you place a tile onto the board that creates a path which you must follow. Where the difficulty comes in is when you have to cross the tiles of the other players and follow the connecting paths. If you follow a path that leads you off the board or the collides head-on with another player you’re out of the game, and the last player left on the board is the winner. Every tile is different and on each player’s turn, they will have a small selection of tiles to choose from. So it’s up to you whether you play the game aggressively or passively, and luckily both of those strategies work.

Tsuro lacks complexity and there isn’t a story to speak of for those players who prefer to roleplay along with their games. But, if learning a complex game is the goal of a game night or gathering, Tsuro is a good way to begin the night and get everyone into the mood for games. This is always my first choice for my extra difficult guests (as well as my least difficult guests).

One important thing to note is that the tiles, while very pretty, are not the strongest quality cardboard out there. After playing only a few games edges had started tearing off and layers had begun to peel. It doesn’t take away from the playability of the game to have the worn pieces, but for many collectors, this is a problem. The player pieces themselves are very sturdy and high quality and the board is as strong as you can expect a game board to be.

In my experience, the game has been a huge success with family, friends, classmates, coworkers, and even a few strangers. Every event that I bring the game to everyone involved has a good time. If you’re taken out of the game early, no worries. Every round lasts less than ten minutes and I’ve never had a group be finished with the game after just one round. Tsuro is easy to learn and easy to master. Even after moving on to much more complex games, this game still gets played at every game night. 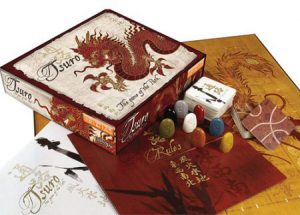 Ditch The Screens: 5 Key Benefits To Playing Games With Your Kids

It’d be so easy to bring out the iPads and let everyone entertain themselves. But,

Stuck in the house? Here’s The Big List Of Online Card, Board & Tabletop Games

Stuck at home over the holidays? Our gift to you! The Big List Of Online

Yu-Gi-Oh! Duel Monsters is one of the most popular trading card games of all time

Many professional magicians consider magic kits corny, but they can still remember their first one!